“Everything that the last speaker just told you is wrong”.   This shocked me since I was the last speaker.  I was just rejoining the audience after my presentation at a satellite data distributors’ conference in San Diego in 2008.

I had given a presentation on PhotoSat’s experience using satellite photos for elevation mapping.  I had shown comparisons between PhotoSat stereo IKONOS satellite elevation mapping and hundreds of mining exploration drill  collar elevations.  Our results suggested an IKONOS mapping accuracy of better than 1.0m in elevation.

The speaker who followed me showed the published specifications of the IKONOS satellite.  He declared that this proved that the results I had just shown were impossible. Then he went on to talk about his own stereo IKONOS mapping results.  His results showed 5m to 10m in elevation mapping accuracy.

Looking for a way to unambiguously measure our accuracy

The speaker who challenged PhotoSat’s results in the San Diego meeting actually did us a huge favor.  Although it did not feel like that as I sat fuming in my chair.  His comments provided the motivation for me to find a way to prove we were right.  After this meeting we set about looking for a way to unambiguously demonstrate the accuracy of the PhotoSat stereo satellite elevation mapping.

We concluded that to prove our accuracy we needed to find a highly accurate ground survey data set covering hundreds of square kilometers. But where to find it?

About two months later, a light came on.  I realized that we might find the elevation survey data that we needed from a large, regional, mining exploration gravity survey.  The topographic surveys associated with mining exploration gravity surveys are among the most accurate and carefully checked topographic surveys in the world.

I phoned Kevin MacNabb, president of MWH Geo-Surveys International.  Kevin did gravity survey contracts for me when I was a geophysicist at BP.  I said “Kevin, I am looking for a large regional gravity survey with thousands of accurate topographic survey points.  I want to use the topographic survey data to measure the accuracy of PhotoSat’s stereo IKONOS satellite mapping.”

I added “it would be great if the data is in an area of sparse vegetation in a remote region of the world.  This way we can prove the accuracy of our stereo satellite topographic mapping and show that we can do this anywhere in the world.”

Kevin replied “how would 45,000 ground survey points covering over a thousand square kilometers just west of Asmara, Eritrea do?”  For us this was the perfect data set. Eritrea was a challenging place to work.  It had just emerged from a civil war.  A perfect place to be mapping from satellites. For a fuller description, click this link. 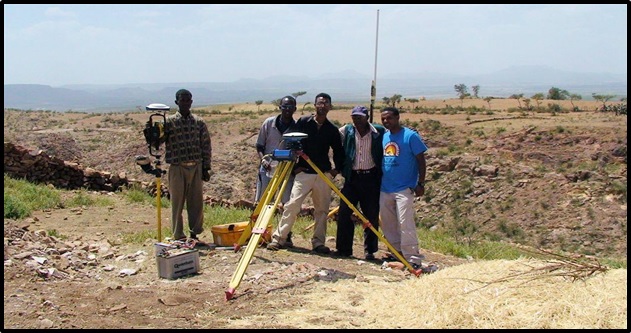 Asmara Project, Eritrea. MWH Geo-Surveys differential GPS survey crew and equipment. Over 45,000 ground points were surveyed between 2004 and 2008. The Magellan RTK base with a ProMarkTM 500 GPS rover are shown in this photo.

We were immediately able to use 10,000 of the Eritrea ground survey points to measure the elevation accuracy of 200 km² of stereo IKONOS elevation grid.  PhotoSat had already produced this elevation grid for Sunridge Gold.  We measured the accuracy of the PhotoSat elevation grid as 48cm Root Mean Square Error (RMSE).  The full 2008 IKONOS Eritrea Accuracy study is available to review.

Since 2008, PhotoSat has been using the 45,000 Eritrea ground survey points as a test bed to measure accuracy improvements in the PhotoSat processing.  This gives us a quantitative measure of accuracy improvements.  We have shown the results in many conferences and published them.  If there are still disbelievers they are certainly not challenging us publicly.

Soon after the commissioning of the WorldView-2 satellite in early 2010 DigitalGlobe asked PhotoSat to use its new processing system to conduct an accuracy study over the Eritrea test area using stereo WorldView-2 photos.  The PhotoSat Eritrea Accuracy study showed WorldView-2 accuracy of better than 30cm RMSE.  These results were issued on March 16, 2010.  The news release is available here.

Once the PhotoSat elevation grids achieved an accuracy of better than 30cm many of our customers began using them in place of ground surveying.  We consequently renamed our products that have accuracy better than 30cm to surveying products.

Since PhotoSat first acquired the 45,000 ground survey points in Eritrea, we have used the data for hundreds of accuracy test and studies.

In 2016, we used the current version of the PhotoSat Geophysical Processing System to process a full range a stereo satellite photos over the Eritrea test area.  Some of these results are published on our website on the links below.  The link names include the satellite name, the number of ground control points used in the processing and the RMSE accuracy.

If you would like more information on PhotoSat surveying you can visit the following links. The accuracy studies include stereo satellite data from the following satellites:

PhotoSat has measured accuracy on over 750 stereo satellite surveying projects

PhotoSat has delivered over 750 satellite surveying projects since 2007 and we have carried out accuracy evaluations on the majority of them. Most of the survey data on these projects belongs to our customers and cannot be shared publically; however, customers have provided feedback on many of these projects.

The results of these 21 new accuracy studies are consistent with our project accuracy evaluations and customer feedback.

The accuracy studies were conducted over two test areas. One test area is west of Asmara, Eritrea where PhotoSat has access to more than 45,000 ground survey points over a 50km by 20km block.

The effect of different numbers of ground survey points

PhotoSat has been continuously producing satellite accuracy studies since 2007

In order to provide objective quantifiable accuracy data for stereo satellite surveying and mapping, PhotoSat has been continuously producing accuracy studies since 2007. We have previously published nine of these studies. The rest of the studies were used for calibrating and improving our processes.